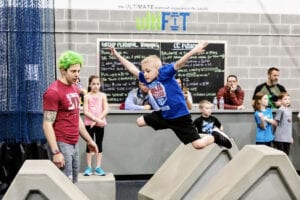 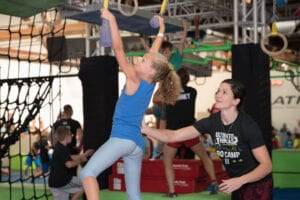 CHICAGO, IL – A total of 13 athletes who manage, coach or train at Ultimate Ninjas gyms will compete on Season 13 of the wildly popular American Ninja Warrior (ANW) show, which begins airing Monday, May 31. Two of the athletes, Maggie Owen, age 15, from the Chicago area and Sam Folsom, age 18, of St. Louis are youth who were selected by the production team.

The Ultimate Ninjas athletes competing on ANW Season 13 are:

Earlier this month, Jesse Labreck, manager of Ultimate Ninjas’ Naperville gym, came in second in the first ever American Ninja Warrior Women’s Championship. Jesse Labreck was the first rookie woman ever to qualify for the ANW Vegas National Finals.

“From the beginning, we have focused on creating an experience that closely mirrors the show and builds, not only the skills, but also the internal strength required to compete at this high level,” said Jeff Piejak, owner of Ultimate Ninjas. “These talented athletes are ready, and we can’t wait to cheer them on as they battle it out this exciting, comeback season of the show.”

Season 13 will be especially anticipated since the show had to cancel qualifying rounds in Los Angeles during the spring of 2020 when production closed in March due to the coronavirus pandemic. The much anticipated Las Vegas National Finals, which is scheduled for Season 13, were also cancelled last year. Instead, Season 12 eventually concluded with a reconfigured event during which athletes competed in a bubble set up indoors at St. Louis’ Dome at America’s Center.

Ultimate Ninjas has been recognized by USA Today as a top United States Ninja Gym. A Professional Ninja competitor from the American Ninja Warrior television show manages each Ultimate Ninjas location. Each gym features 10,000-square-feet of obstacles for kids and adults of all ages and skill levels, including obstacles identical to those on ANW and even built by the same entity that provides course equipment and stunt design for the show. Iconic obstacles at Ultimate Ninjas include the jumping spider, salmon ladder and a four-level warped wall ranging from 8 to 14.5 feet.

“Ultimate Ninjas is not just a place to have fun and get fit. Everyday we see kids and adults build confidence and internal strength, along with physical strength, as they practice, and ultimately conquer, the physical obstacles at Ultimate Ninjas,” said Piejak.