When a water main break sent more than six feet of water into the subbasement of the Mel Carnahan Courthouse in Downtown St. Louis early in the morning of Saturday, July 6, mechanical contractor Integrated Facility Services (IFS) mobilized to quickly get emergency air conditioning to the 10-story building to avoid disruption of the upcoming work week. A team of six IFS technicians coordinated delivery and installation of piping and two, 400-ton chillers to temporarily replace the two, 600-ton chillers and pumps that were damaged in the flood. Located at 1114 Market Street, the building houses St. Louis circuit courtrooms and offices of the circuit attorney, public defender and sheriff.

One of the largest mechanical contractors in St. Louis, IFS has provided HVAC service to many City of St. Louis facilities for years. The first IFS team members arrived on site at 7:30 a.m. while the fire department was pumping water out of the subbasement. IFS worked with the city to barricade 11th Street and provide traffic control while the large equipment was positioned on the street and temporary piping was run to the building.

The Mel Carnahan Courthouse is controlled by an American Auto-Matrix Automation System previously installed by IFS. Two members of IFS’ automation department quickly isolated the damaged area of the building to get the automation system back online as well as monitor the temporary chillers. 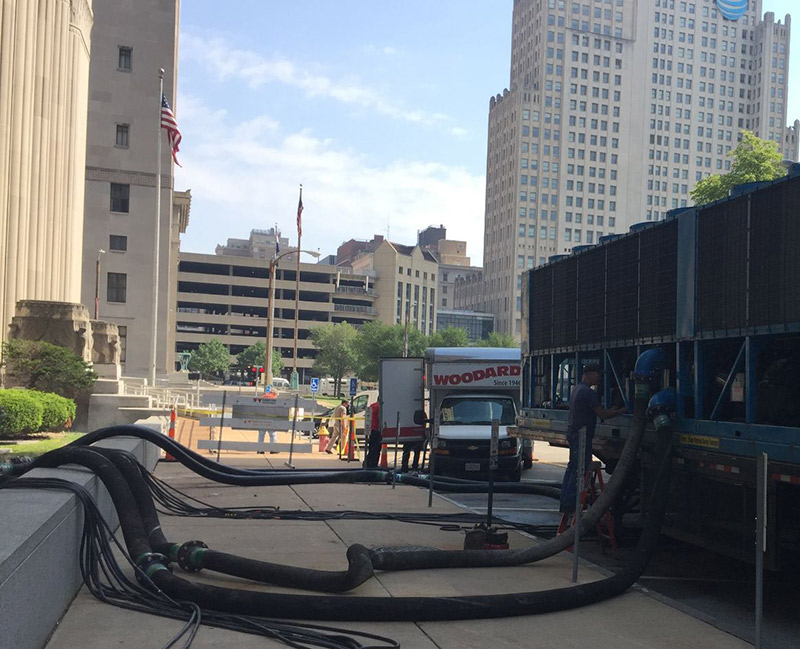 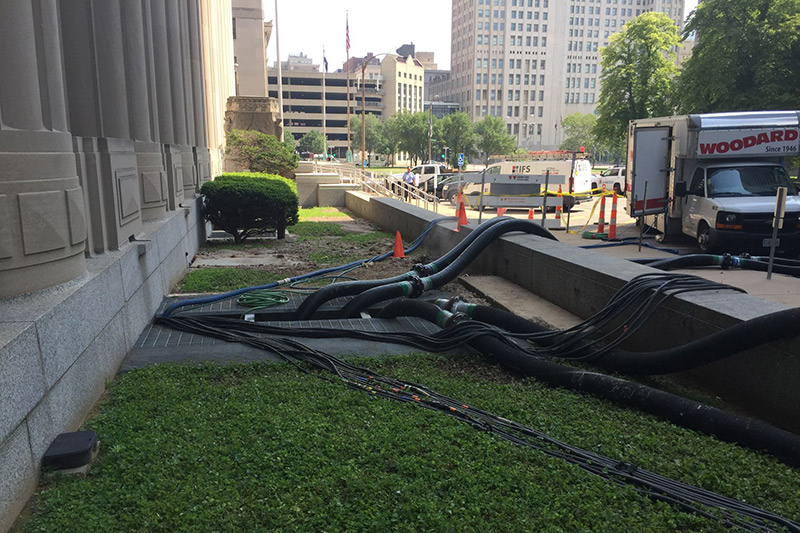 By 11:30 p.m. on Saturday night, just 16 hours after the IFS team arrived, the first chiller was online. The second chiller was online by noon on Sunday. Half of 11th Street will remain closed until the original equipment is repaired and back online, which is estimated to take several months.

As a provider of 24-hour HVAC service, emergency repairs on weekends is not uncommon for IFS. Last month, on the day the Blues hosted a Stanley Cup Final playoff game and the Cubs were in town to play the Cardinals, multiple teams of IFS employees were mobilized to bring emergency hot water online for guests at three packed hotels and prisoners at the St. Louis City Justice Center in Downtown St. Louis. The facilities all lost hot water when the Ashley Energy plant that makes all of the steam for the City of St. Louis flooded.

IFS worked with Aggreko to have hot water heating equipment delivered locally and from Chicago, Texas and Minnesota. The IFS team arrive at 11:00 a.m. on Sunday, June 2 and had hot water online overnight for both The Westin St. Louis and Hilton St. Louis at the Ballpark. IFS team members were on site until 6:30 a.m.

Integrated Facility Services (IFS) is a full-service HVAC, plumbing, piping, fire protection and building automation firm with more than 250 professional and trade employees. Established in 1966, IFS delivers integrated mechanical engineering and construction, installation, service and planned maintenance, and energy conservation solutions to ensure occupant comfort, improve efficiency and reduce operational costs. IFS is ranked among the top 100 HVAC contractors in the country by Contractor Magazine, was named a 2018 Midwest Top 50 Specialty Contractor by Engineering News Record and is the fifth largest mechanical contractor in the St. Louis region, according to the St. Louis Business Journal. IFS serves clients in Missouri and Illinois, with offices in St. Louis and Columbia, MO.