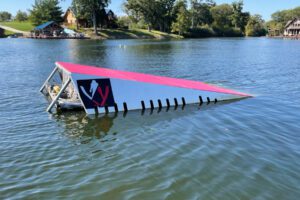 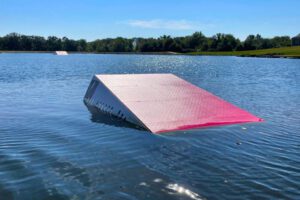 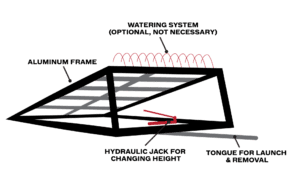 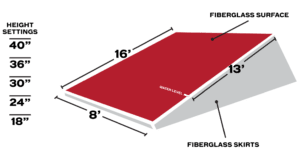 To save high-res file of a photo, click on the image above to open
the full-size photo and then right-click to save the file to your computer.

The Mini has an eight-foot-wide and 16-foot-long ramp with fiberglass skirts. Advanced features include a kneeling platform for height and orientation adjustments and a readily accessible hydraulic lifting system.

Lake Richard in Dow, Illinois is home to many of the top nationally-ranked youth skiers in the United States. The Mini prototype had proven success in training seven of those children, ranging from four to nine years of age, all of whom became top 10 nationally ranked ski jumpers: William Roberts, Edward Roberts, Nellie Roberts, Bret Stackpole, Sammy Stackpole, Katie Schultz and Brendan Schultz. In fact, since 2008, The Mini has had a 95% success rate with over 150 new jumpers.

“The first generation, mini-training jump gave our Lake Richard kids the opportunity to have fun learning to jump without the intimidation of the big jump.  They progressed on that mini to higher settings and boat speeds, later transitioning to the big jump seamlessly and with good technique,” said Jeff Roberts, President of Mini Jump Ramps, LLC. “These ‘Mini graduates’ boast four National Championships; three Mini graduates have been ranked in the top five in world rankings; and one of these three has been the world ranking list champion on three occasions.”

In addition to its value in teaching new jumpers before trying the big jump, The Mini can be used for years to come to refine body position and technique in a slow and controlled manner.

Mechanical engineer and MJR co-owner James Webber designed, added several new and unique features to the first-generation design, including a hinging device that minimizes the variance in length out of the water to within a couple of inches between the lowest and highest ramp settings.

“We believe this new tool for the show and three-event ski communities, as well as ski schools, will revolutionize the way people teach and learn to jump by having fun and perfecting technique with deliberate and prudent height and speed progression,” said Webber. “The Mini should grow the number of ski jumpers by leaps and bounds over the next several decades.  In short, it is just a safer and much more fun way to learn.”

Learn more about the Mini at minijumpramp.com or by contacting Jeff Roberts at 618.406.0461.