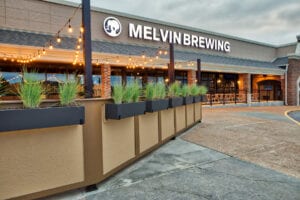 Wyoming-based Melvin Brewing has opened its doors at 110 Hilltop Village Center Drive in Eureka. This is the fourth location for the craft beer maker, distributor and restaurateur, and its first in Missouri.

Local contractor Knoebel Construction worked on the project. Knoebel converted an existing space consisting of a restaurant, retail stores and storage spaces into the new brewpub, officials said. The $2.1 million project took two years of planning and six months for the construction build out, officials said.

The 12,700-square-foot space can accommodate 276 guests and features a full-service bar, a restaurant and a brewery.

The space is surrounded by a game room, a private event space and a full bar. Melvin is equipped to brew and package 1,500 barrels of beer, officials said. Loading docks at the building will facilitate shipping of Melvin products to 15 states.

Melvin also features an outdoor patio that can seat 50 guests, an outdoor gathering space with a fire pit, lounge and a retail store.

The brewery features more than 20 selections on tap and an Asian-influenced pub fare menu. The location is expected to create 45 jobs, officials said.

Melvin was founded in 2009 in the back of a Thai restaurant, according to Melvin Brewing’s website. It’s owned by Jeremy Tofte.

With 2018 revenue of $80.05 million, Knoebel Construction is one of the region’s largest privately held companies, according to Business Journalresearch.