The St. Louis County Police Department announced that Barton, captain of the 7th Precinct in West St. Louis County, will take the helm after Chief Jon Belmar retires. His retirement is scheduled to take place on April 30.

Barton has been with the county police department for 40 years.

Congratulations to Captain Mary Barton on her promotion to Chief of Police! 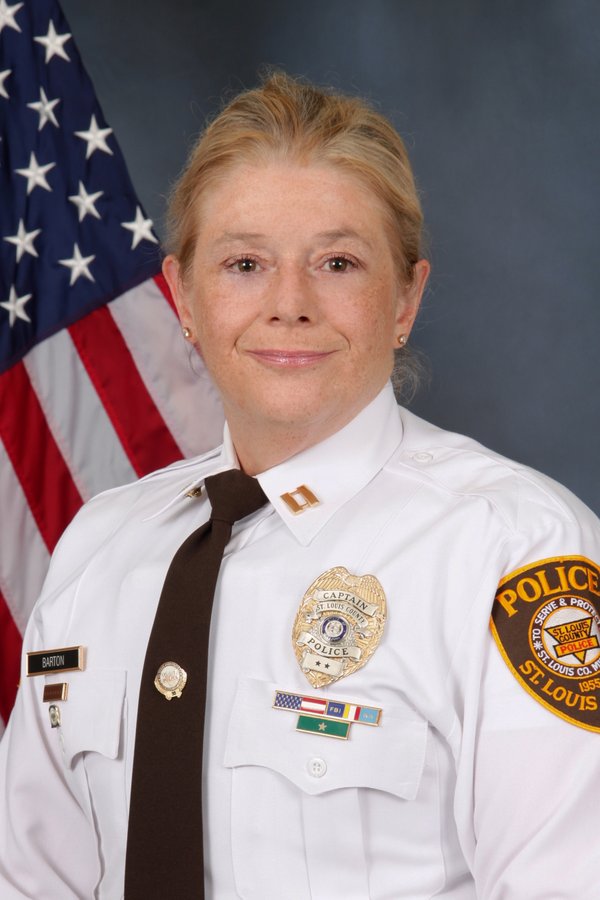 According to a March 2 post on the West County Precinct’s Facebook page, Barton took her position with the precinct recently.

On Thursday, the police board promoted Barton to lieutenant colonel. Effective May 1, she will be appointed to the rank of colonel and begin her tenure as the ninth St. Louis County Police Chief.

She will be the first woman to serve as the department’s chief.

Department spokeswoman Officer Tracy Panus initially said the department would not be disclosing Barton’s age. But hours later, Sgt. Benjamin Granda told 5 On Your Side that Barton is 62.

“The board listened to the community, worked fast and hard to complete the selection process,” according to a statement from Chairman William “Ray” Price. “The department needs consistent and steady leadership as it deals with COVID-19 and the other challenges facing all police departments in this nation.

Dr. Laurie Punch, another police board member, wrote: “Lieutenant Colonel Barton is an experienced leader with a ‘clear vision’ of an equitable future for both the department and the community we serve.”

“Lt. Col. Barton will be the first woman chief of a large police department in the St. Louis Metropolitan area,” according to the union’s statement. “Women represent the fastest growing demographic of law enforcement officers and Lt. Col. Barton’s appointment is a beacon of light for those officers.”

The Ethical Society of Police, a membership organization that represents black officers, also weighed in on Barton’s appointment with a statement.

“African-American officers have faced unbelievable challenges with our voices being heard under former Chief Jon Belmar, former County Executive Steve Stenger and the current County Executive, Sam Page,” according to the statement. “We hope that going forward our members will be heard by Chief Barton.

“We are more than willing to work with Chief Barton and we will support efforts with fairness, diversity and inclusion for all officers and citizens.”

“It has been an honor to work with and for the women and men of the St. Louis County Police Department,” Belmar said in a news release. “The dedication, sacrifice, and bravery of those that work for this Department is unmatched.

“The citizens and businesses of St. Louis County deserve nothing but the best, and I firmly believe they receive that from us every day.”

Crime has risen in the county during Belmar’s tenure.

Belmar announced his retirement Feb. 10, just hours before the county announced it had reached a $10.25 million settlement with a gay police lieutenant who claimed Belmar and his administration discriminated against him because of his sexuality.

A jury awarded the lieutenant nearly $20 million in October. Within a week of the verdict, County Executive Sam Page replaced four of the five police board members, but also characterized Belmar as “a leader, not a quitter.”

In a tweet, Page congratulated “Capt. Barton” on “making history.”

“Captain Barton will take command of the county police department at a moment of uncertainty. We do not yet know what unprecedented challenges the current state of emergency will present nor for how long it will present them.”