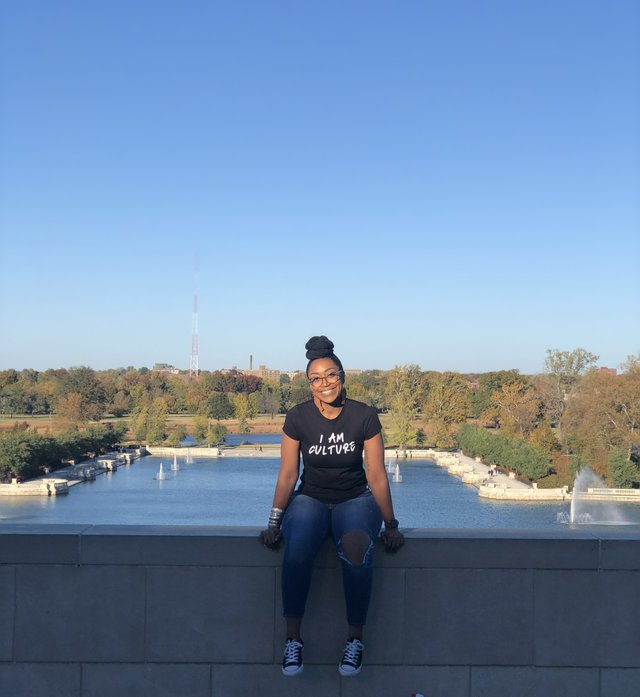 Here are two things Officer Shanette Hall needs you to realize: First, she’s tired of being told to wait for change. Wait for facts to come out, people say, when an African American man dies in police custody after a white officer kneels on his neck for eight minutes. She likes to quote James Baldwin: “It’s taken my father’s time, my mother’s time, my uncle’s time, my brothers’ and my sisters’ time. How much time do you want for your progress?” She adds: “Here we are, waiting. And while we are waiting, America is suffocating us.”

The second: While she can’t condone the violence that sometimes accompanies protesting racism and police brutality, she’s also fighting for criminal justice reform. “We are out here fighting for officers to be terminated when they need to be terminated,” says Hall, a St. Louis County police officer and board member of the St. Louis County Chapter of the Ethical Society of Police. “We are fighting to have officers disciplined when they need to be disciplined. We are fighting for communities where they are being over-policed and underserved.” Shortly after Minneapolis man George Floyd’s death, the Ethical Society released a statement calling it a “senseless murder,” and reprimanding law enforcement for not treating Floyd the same way they have “militia[s] armed with assault weapons who’ve stormed, shut down, and conducted … mock hangings at capital buildings.” The group was formed in the city in 1972 to fight race-based discrimination within the St. Louis Metropolitan Police Department and also within communities. In 2018, it expanded to include the county. Community engagement is important to the group, be it holding a diversity recruitment event or engaging with local schoolchildren. But so is reform. Here, Hall on the importance of fighting racism within police departments and how she would reimagine parts of her job.

Your father was a police officer. Did he influence you to go into law enforcement?

Yes, but it was not because I was familiar with law enforcement. I had a great love for my father, and I wanted to embody him as much as I could. My father was known in the community that he worked in, and it was not just for being seen all the time. It was more so for helping people and giving people chances—being an equity referee, which is what I like to see myself as. I wanted to be to people what he was to people.

What is an equity referee?

It’s what officers would interpret as someone who is able to use their discretion. As police officers, we’re supposed to uphold the law, in all aspects of the law. They do allow you some form of discretion. Oftentimes, what happens is officers use discretion when they feel compelled to. If you have a group of individuals who all come from one type of culture, or are one ethnicity, or one race, that compelling feeling [translates to] one type of discretion. If you have somebody who comes from a different background, what equity means to them is a little different. They’re able to understand what someone who looks like me has been through.

How have you seen that played out while working?

I remember being on a call for a domestic [disturbance] with a black female and a black male. The female was the victim based on what I saw when I was there. I also found out that this woman had some minor traffic violations. Very minor—like not wearing her seatbelt. What I have seen in the past is that even when victims call the police, if they do have a form of a traffic warrant—which technically is an order from a judge to arrest that person—officers would still arrest the victim. I thought this was a horrible idea, especially in a case like this. A woman is calling us and needs us to help her. She’s in a dire moment of her life. She’s experiencing a traumatic moment in her life. For us to come in her door and not be able to understand where she is coming from and why it is that she may have had that minor traffic violation…there are probably several officers who would have arrested her. And at no point should we attempt to arrest the victim. That may have a horrible impact. She may not want to call us next time. And what if she doesn’t call us next time and she’s seriously injured or killed by her partner?

Speaking from your position as a police officer, why is police reform needed?

Representation is extremely important. I don’t think people understand how much representation matters. Having a more diverse group of people in your police department only broadens your mindset and your approach as a department as a whole. People say two heads are better than one. Well, two heads are better than one, but two different kinds of heads are better than one as well. You need that diversity, and once you have diversity, you have to have inclusionary practices within your police department. Because police departments love to say, “We have diversity. We have women, we have African Americans, we have bilingual people, we have members from our Muslim community.” But there are no inclusionary practices that are implemented within police departments. It doesn’t matter if you have all the ingredients to make a cup of soup. If you’re not including all of those ingredients in the pot, you’re not going to have this wonderful meal. We need to change how our hiring process looks. We can recruit all the diverse applicants we want, but if we have a certain mindset of what a police officer should look like, we’re going to weed out all those different people anyway.

When we look at training, I think we put such a huge, heavy emphasis on combat training and on active shooter training, which is very important. But we missed the mark with the history of policing. We can’t understand where we want to go unless we know where it is we came from and how policing started off in America with slave patrols.

We also fail when we teach any type of cultural competency training within our department, and letting people understand that this is going to impact your communication skills in a positive way. We don’t teach that. We just stick it in with verbal judo: “Always say please.” It’s good, but we are not teaching anything about different cultures. St Louis is a diverse place. It’s an amazing place. We need to be able to learn how to talk to everybody. We need to meet people where they are when we talk to them. We need to understand people in the places where they are.

There have been large shows of support at protests, from different people, young and old, people of color and white people. Do you feel like this time is different from 2014 and 2017?

To be honest, there’s not too much of a difference. People are still upset. There’s not too much of a difference in people’s response to what is going on, and that shows we have not had as much progress as we would have liked to have in this country. If so, we wouldn’t be in this situation. Sometimes with police officers, you’ll see this battle. An incident of murder will come out, and you’ll see people begin to divide. You’ll see a person argue a situation from a legality aspect. They take the humanity out of it. We’re not able to see people as people, especially if they’re people of color. People are upset about that. We’re not being seen as a person. We’re not being seen, we’re not being heard, we’re not being valued. Imagine how hurtful it feels to hear someone say after we just witnessed somebody murdered, “Well, let’s just wait to see all of the facts come out.” That’s what black Americans are having to deal with.

There are people stating that “all cops are bad” and demanding that elected officials defund and dismantle police departments. How do you react to those people and their views?

I disagree. I don’t think that you can do away with the police. We do still have violent offenders on the street. We have to protect children, men, women, the elderly. You’re going to have violent criminals. But what we must know is that people are telling you that they need to dissolve police departments for a reason. It’s coming from a place of mistrust, a place of hurt. It’s coming from a place of feeling that police departments don’t protect them in the first place.

There are times when you have to completely destroy something. In this case, we just have to reform every aspect of it. It needs to be completely changed. It needs to have a huge shift within it. It will be painful, it will be hard, it will force Americans to look at ourselves in the mirror and understand our ugly past, not just the history we want to remember.