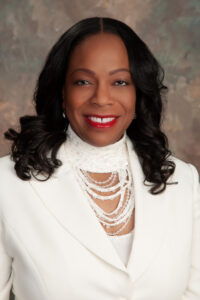 To save a high-res file of the photo, click on the image above to open
the full-size photo and then right-click to save the file to your computer

ST. LOUIS, MO – Cheryl Orange, a lieutenant with the St. Louis Metropolitan Police Department District 3 and Ethical Society of Police board member, has been named as a recipient of the 2022 St. Louis Women of Achievement Award. Each year the St. Louis Women of Achievement honors the accomplishments of women who, through volunteer efforts, have demonstrated dedication and commitment to improving the quality of life in the St. Louis community. Orange has served as a police officer for more than 30 years. She joined the Ethical Society of Police (ESOP) in 1990 and currently serves as the treasurer.

Recognized for her dedication to social responsibility, Orange dedicates her time to a range of community organizations. She founded STL’s Finest Skate Crew and Rollin’ for Backstoppers, which increases awareness and provides support to spouses and children of fallen first responders. A member of Delta Sigma Theta Sorority, Incorporated, she serves as the co-chairperson of the St. Louis Alumnae Chapter’s Emergency Response Team. Through her role with ESOP, Orange boldly advocates for equality in law enforcement and speaks out locally and nationally against police misconduct and issues of racism within departments. Her New York Times video “I’m in a Police Union That Holds Bad Cops Accountable” led to many national headlines in Spring 2021.

ABOUT THE ETHICAL SOCIETY OF POLICE (ESOP)
The Ethical Society of Police (ESOP) is an association of police officers, park rangers, and civilians that advocates for racial and gender equity in the St. Louis Metropolitan Police Department and St. Louis County Police Department. ESOP was founded in 1972 to address racial biases within law enforcement. ESOP also works to improve community/police relations, develop policies and programs to reduce crime, elevate the status of minority civilians and police officers, encourage greater minority employment by law enforcement agencies, and increase professionalism in law enforcement. Membership is open to all races and includes more than 370 law enforcement professionals employed by the City and County of St. Louis. ESOP membership is approximately 97% African American, but membership is open to all races, religions and sexual orientations. For details, call (314) 690-3565, email info@esopstl.org or visit www.esopstl.org.