Six months ago, the acquittal of a white police officer charged with the murder of an African-American man sparked widespread protests in St. Louis and put a spotlight on racial disparities in the police department.

The free 10-week program, now is in its third year, preps academy hopefuls in subjects ranging from public speaking to basic constitutional law. The organizers, which include active and retired police officers from the St. Louis department, have selected subjects that often eliminate African-American candidates during the academy selection process.

By better preparing candidates for the academy, Hayden hopes the program will help boost the number of minority recruits.

“When each academy class comes about, you almost run out of African-American applicants,” Hayden said. “Those are things that are concerning us, because the goal is to have the department mirror the community.”

The issue is not unique to St. Louis. In cities across the country, the racial diversity of officers often doesn’t match that of the communities they serve. According to recent U.S. Census data, nearly 80 percent of police officers in the U.S. are white, while almost 13 percent are African-American.

“When people in the community see officers who look like them, they’re more willing to accept guidance and become involved with that law enforcement agency,” said Patrick Oliver, an associate professor of criminal justice at Cedarville University who worked for 27 years in law enforcement. “It creates a greater sense of public confidence in the police agency.”

Stephon Somerville, a 26-year-old participant in the Ethical Society pre-academy recruitment program, agrees. The north city resident eventually hopes to work as a police officer in his own community.

His goal is to to help rebuild relationships between African-American neighborhoods on the north side and the police who serve them.

“We lost that connection, big,” Somerville said. “I’m just trying to bring that back.”

He thinks he’d be an asset in bridging that gap, but not everyone in his family supports his decision to become a police officer. Several are concerned about his safety.

“[They’re] saying, ‘Hey man, they’re killing police officers; you guys are a target when you put that uniform on,’” he said. “But I got a couple family members that are 100 percent about it. ‘Do that, that’s what you need to do, I think that’s your calling.’” 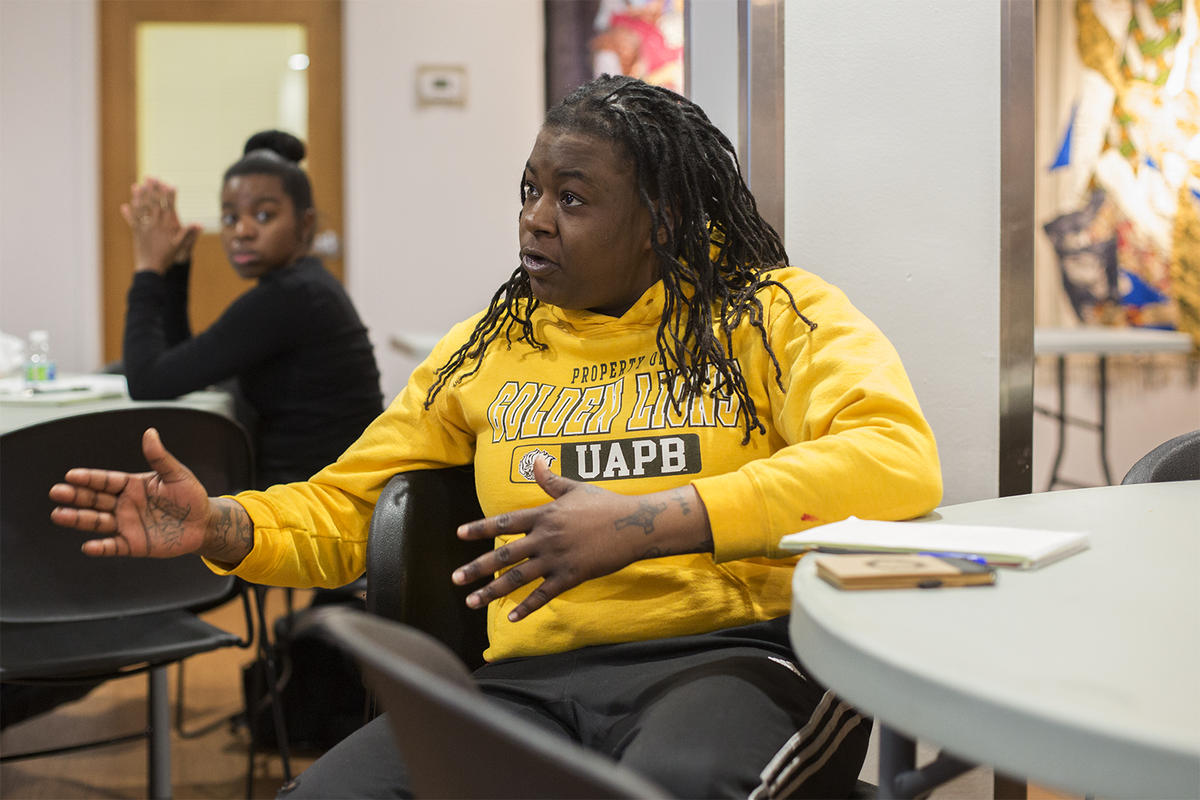 The 25 participants meet twice a week at the Urban League in Grand Center. In one session, Captain Perri Johnson of the St. Louis Metropolitan Police Department leads a discussion on cultural differences.

Johnson weaves personal anecdotes from his experience as a police officer with information on key concepts, including implicit bias and stereotyping.

“It’s just very powerful listening to their stories, because everybody comes from somewhere,” said Antoinette Williams, a program participant. “It gets to let you know that no matter where you came from, you can do it, too.”

The 29-year-old said she hopes to become a sergeant and, eventually, chief of police.

Although the goal of the program is to help increase minority recruitment, E.S.O.P. president and St. Louis Metropolitan Police Department Sergeant Heather Taylor said that racial diversity is just one piece of the puzzle.

The number of women in the department slightly increased between 2008 and 2016. In the city, women make up just over half the total population.

After the program ends in May, many of the participants say they’ll apply for the St. Louis Police Academy. If accepted, they’ll undergo seven months of training.

In the first two years of the Ethical Society of Police pre-recruitment program, a total of 37 participants have been accepted to the academy and 20 have graduated. Of these, most are working in law enforcement in the city.

“This is a project that’s about engaging and having candidates of all races who understand the importance of understanding others,” she said. “It’s a big deal, and I’m proud of it.”