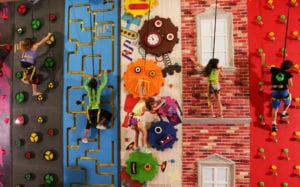 Upper Limits will celebrate the grand opening of the new Chesterfield location on Friday, November 11 from 1 p.m. – 10 p.m. and Saturday, November 12 from 10 a.m. – 9 p.m. Festivities include discounted climbing all day on both days as well as music, food and an outdoor climbing wall on Saturday. The first 100 guests on Saturday will enter to win free one-year gym memberships. For more information, visit upperlimits.com/chesterfield/grand-opening.

“We are very excited to open our third St. Louis location in what has become a “kid zone” in Chesterfield,” said Chris Schmick, founder of Upper Limits. “With neighbors like Sky Zone, Bounce U, Elite Football Academy and other popular family destinations, we designed our newest facility to cater specifically to children and families but also to satisfy our experienced adult and competitive youth climbers. All ages will love scaling its unique, whimsical obstacles, which you can’t find anywhere else in the region.”

Highlights of the main climbing gym include a nearly 30-foot continuous climb from the bottom of a sunken bouldering pit to the peak of a large top-out boulder. The new facility is the first rock climbing gym in the USA Climbing Midwest region to feature Wacky Walls, a new concept in rock climbing. In this separate climbing area, climbers ascend unique-themed walls on nearly 20 auto belays, automatic devices that take up slack as a climber ascends and safely control the descent when the climber lets go or falls. Theme walls include a beanstalk, brick-faced building and spider web. Wacky Walls is available for open climbing as well as birthday parties.

Other features include a pro-shop, birthday party room, lounge area, climbing training room and workout area. Black lights and disco lights are installed throughout the facility for after-hours glow-in-the-dark public and private events. Upper Limits offers a range of climbing classes for beginners, advanced climbers and families as well as private lessons, outdoor climbing opportunities and a portable climbing wall for off-site events.

“Rock climbing is more than a full-body exercise, it also is a powerful way to boost a child’s self-confidence, independence and mental development,” said Schmick. “The first time a child reaches the top of the wall, they’ll realize that they’re capable of doing anything they work towards, even if it looks big and scary at first!”