Ethical Society of Police will distribute filled backpacks to youth on Saturday, August 21 at O’Fallon Park

Ethical Society of Police will distribute filled backpacks to youth on Saturday, August 21 at O’Fallon Park

Other activities include an incentivized vaccination event, K-9 and mounted police demonstrations and a Pop Up City Hall by the Mayor’s Office 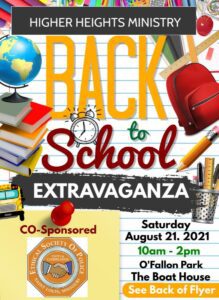 ST LOUIS, MO –  Ethical Society of Police (ESOP) is partnering with Higher Heights Ministry to sponsor the sixth-annual Back To School Extravaganza, which will distribute more than 500 backpacks filled with school supplies to kids and families in the St. Louis metro area. The free event will take place at O’Fallon Park near the Boat House from 10am until 2pm on Saturday, August 21. School uniforms, shoes and socks as well as other school related supplies will also be distributed. In addition, ESOP is partnering with the Department of Health to offer free COVID-19 vaccines on site. Anyone who receives a vaccine at the event on Saturday will receive a free bicycle or air conditioner, which were anonymously donated.

At the event, the Mayor’s Office will feature a “Pop Up City Hall” with representatives from Neighborhood Stabilization, Planning Department, Treasurer’s Office, Department of Human Services, Personnel, Parks and Forestry, Streets, Board of Public Services, Register’s Office and Crime Victim’s Advocate, Juvenile Division and other city resources. This project by St. Louis’ Mayor, Tishaura Jones, brings core city agencies housed in City Hall to one central location in order to provide an opportunity for the community to easily access those services. Social distancing and face coverings will be enforced.

ABOUT THE ETHICAL SOCIETY OF POLICE (ESOP)
The Ethical Society of Police (ESOP) is an association of police officers, park rangers, and civilians that advocates for racial and gender equity in the St. Louis Metropolitan Police Department and St. Louis County Police Department. ESOP was founded in 1972 to address racial biases within law enforcement. ESOP also works to improve community/police relations, develop policies and programs to reduce crime, elevate the status of minority civilians and police officers, encourage greater minority employment by law enforcement agencies, and increase professionalism in law enforcement. Membership is open to all races and includes more than 370 law enforcement professionals employed by the City and County of St. Louis. ESOP membership is approximately 97% African American, but membership is open to all races, religions and sexual orientations. For details, call (314) 690-3565, email info@esopstl.org or visit www.esopstl.org.