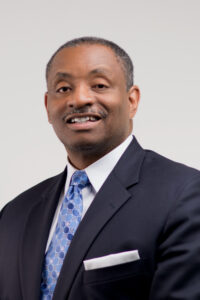 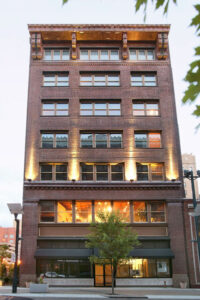 Left Image: Tony Thompson, Kwame Building Group CEO
Right Image: Kwame Building Group headquarters on Washington Avenue in St. Louis
To save a high-res file of the photo, click on the image above to open the full-size photo and then right-click
to save the file to your computer.

ST LOUIS, MO –  St. Louis-based construction management firm, Kwame Building Group (KWAME), is celebrating its 30th anniversary. One of the nation’s top pure construction management firms, dedicating 100 percent of its resources to project management services, KWAME has completed more than 6,000 projects and manages more than $300 million of work annually, with more than 75% of their work from repeat clients. KWAME is headquartered in St. Louis with offices in Atlanta, Dallas and Seattle.

Other notable projects include the St. Louis Cardinal Stadium modernization, more than one dozen schools in the Dallas Independent School District, the City of St. Louis Justice Center and repeat work for the Metropolitan Sewer District and Missouri Department of Transportation.

As a  Minority Business Enterprise (MBE), KWAME has a long-standing commitment to M/WBE success. With more than 75 percent of the firm’s workforce consisting of minority and female professionals, KWAME is committed to ensuring diversity within its own workforce and among teaming partners.

KWAME has long supported various education and mentorship programs focused on growth, development and leadership of young professionals. Thompson and his wife, Kim, founded The Kwame Foundation, a non-profit charitable organization that creates opportunities for youth in underserved communities through mentorship and scholarships.