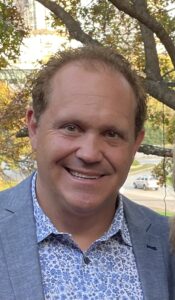 To save a high-res file of the photo, click on the image above to open
the full-size photo and then right-click to save the file to your computer.

ST LOUIS, MO – St. Louis-based developer Mia Rose Holdings, led by Tom Kaiman, has added entrepreneur Jim Cook as Principal. Jim Cook is a commercial real estate developer, restaurateur and a private lender that makes investments worldwide. He and his wife Amy are co-owners and partners of several Sugarfire Smokehouse restaurants and are one of the largest franchisees of Imo’s Pizza locations in St. Louis.

“After successfully working together on developments for many years, we are excited to formalize our partnership through Mia Rose Holdings and look forward to delivering Class A developments to the region and other strategic locations in the United States,” said Tom Kaiman, Founding Principal of Mia Rose Holdings, LLC. “The level of trust, commitment and accountability we share in one another is absolutely off of the charts! I couldn’t be prouder to call Jim my partner and more importantly my friend.”

Cook brings more than 25 years of experience investing in and developing commercial and residential properties as well as franchising and operating restaurants. Cook opened his first Imo’s Pizza franchise in 1993 and now operates seven locations throughout the region. In 2014, he and his partner Matt Martin opened their first Sugarfire Smokehouse in a retail center that Cook owns in Winghaven. The team now own three Sugarfire Smokehouse locations. The popular restaurant began franchising locations in 2014 and there are now 15 restaurants in Missouri, Illinois, Colorado, Texas and Florida. One of Cook’s newest ventures is a startup called Durabox, which sells job-site storage boxes to end users such as construction companies.

“I am very excited about cementing the business relationship moving forward with Mia Rose Holdings and Tom Kaiman. My involvement with Mia Rose Holdings has been a lot of fun so far, and is a great way for me to continue to help and serve others on a bigger scale,” said Cook. “Integrity, compassion and attention to detail is what comes to mind when working with Tom Kaiman and I want to be part of that!”

ABOUT MIA ROSE HOLDINGS, LLC
Mia Rose Holdings LLC (MRH) is a Chesterfield, MO-based commercial real estate development company that actively acquires and develops real estate to support the needs and vision of local communities. MRH provides comprehensive, first-class development services through partnerships with the best and brightest in commercial brokerage, engineering, architectural and construction services. Mixed-use and luxury multi-family developments include The Junction in Wentzville, PURE Springdale in Northwest Arkansas and The Prairie and The Meadows Luxury Living in Western St. Charles County. MRH was formed in 2014 by Tom Kaiman who oversaw more than $1 billion in development during his previous 15 years of design and construction experience. In addition to multi-family and mixed-use developments, MRH has a strong niche developing and consulting for ice rinks and other athletic facilities, including Maryville University Hockey Center, Pacific Ice Rink and Chesterfield Sports Complex. For more information about Mia Rose Holdings, visit www.miaroseholdings.org