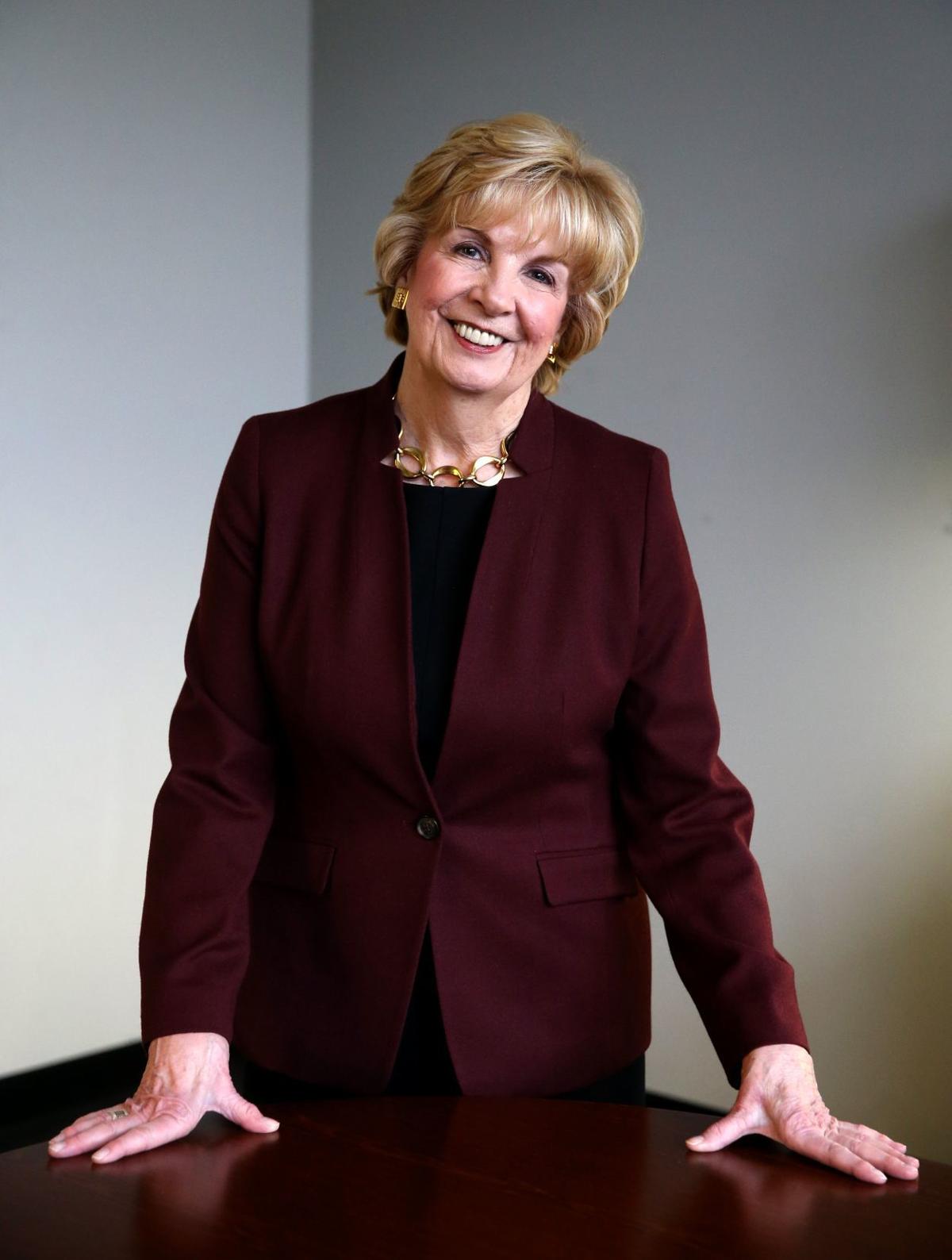 Citizen of the Year Kathy Osborn, president and CEO of the Regional Business Council, photographed on Thursday, Dec. 20, 2018, at her office in Clayton. Photo by Laurie Skrivan, lskrivan@post-dispatch.com

A few days after Michael Brown was killed in August 2014, Tony Thompson got a call from Kathy Osborn.

“What can we do?” she wanted to know. Schools were closed. Businesses shut down. Violence filled the streets.

How are young mothers caring for their children when they don’t have access to services?

Thompson picked up Osborn in his Tesla and they pulled into a Walgreens, filling a cart with baby wipes, diapers, food and other items.

They drove through Ferguson but could not immediately find the church that was accepting donations. They made their way through the Canfield Green apartment complex where Brown was shot by a police officer.

It was chaos, and an eye opener, especially for Osborn, struck by the dense but isolated apartment complexes clustered in one part of town housing primarily African-Americans.

In separate interviews, Thompson, CEO of Kwame Building Group, and Osborn, head of the Regional Business Council, shared the Ferguson story. Thompson did so to convey Osborn’s willingness to jump in with both feet, not for the feel-good moment but to help find a solution to a deeply rooted problem such as racial inequity.

Osborn recalled the trip to Ferguson to show how relationships with some of the 100 CEOs who make up the Regional Business Council go beyond boardrooms and master plans.

“She rolls up her sleeves, gets into the weeds,” Thompson said. And she listens to everyone.

“No one person can have the pulse on every aspect of our community,” he said. “As an older, more senior white female, what would she actually know about an African-American male teenager? She knows what many of them are going through. It’s a story that sums up Kathy.”

Osborn, who spearheaded the establishment of the Regional Business Council in 1999 and has worked to guide the organization toward creating a professional culture that is more diverse and inclusive, has been selected as the 2018 Citizen of the Year. The honor is sponsored by the Post-Dispatch, and the winner is selected by a committee of past honorees.

Osborn was working as an administrator at the University of Missouri-St. Louis, where she received her bachelor’s and master’s degrees in education, when she met E. Desmond Lee, a retired multimillionaire whose philanthropy included the creation of a foundation that endows chairs at UMSL as well as Washington and Webster universities.

Through discussions with his stepson, Andy Taylor, now the executive chairman of Enterprise Holdings, Lee agreed that more companies in the region needed to be a part of civic engagement.

The Regional Business Council incubated for a year at what is now the St. Louis Regional Chamber before becoming independent, starting with about 25 companies.

Today, the RBC has 100 members, CEOs of companies that have at least $100 million in annual revenue and at least 100 employees.

“Des Lee had the vision for this,” Osborn told the Post-Dispatch during an interview in her Clayton office. “There were a lot of companies that had not been tapped into.”

Osborn, serving as vice chancellor of university relations at UMSL, was asked to lead the new venture. In her university role, she raised more than $70 million to help grow what was still a young higher education alternative in the region. She was excited about the new opportunity, but it would mean leaving a successful academic job she enjoyed.

“It was a risky move for me,” Osborn said. “What would it look like if we did it?”

But when she said yes, Osborn decided it would be a long-term commitment.

“Since a young age, I had a sense of purpose and wanted to make a difference. But I didn’t have a clear sense of what that would look like,” Osborn said. “With this, I could see that happen. I made a decision that it was going to be a legacy for me. I’ve had a number of (job) offers, but if I was going to get people of substance, very busy people, to be engaged, to be all in, I had to be all in.”

Working with 100 CEOs has its challenges. Egos. Different priorities. Packed schedules. But Osborn makes it happen, said those asked by the Post-Dispatch to talk about Osborn’s longevity.

“I’ll probably get in trouble with the Republicans on the board, but she is our Nancy Pelosi,” Thompson said.

“She really shows people how they can plug in and do things collectively,” added Taylor. “She is very direct, but direct in such an appealing and convincing way.”

John Capps, owner and president of Capitol Land Company and an RBC founder, has known Osborn most of her life. He went to elementary school with one of Osborn’s younger sisters, at Our Lady of the Pillar.

“Kathy is simply the most confident, knowledgeable, effective civic leader I’ve known in my 68 years of living,” said Capps, whose father, George, was Citizen of the Year in 1976.

Each company pays an annual membership (the amount is not made public), and only the CEOs can attend the meeting to cast a vote on how money should be spent. That policy shows a commitment by the companies to being part of the regional approach to decision making, Osborn said.

The RBC’s mission is to focus on issues that improve the region, including building a larger, more diverse and well-trained workforce. Education is where Osborn’s heart is. And it is where change must occur for all other parts to work, she said.

Osborn, of University City, grew up with college-educated parents, who stressed to her and her six younger siblings that academics are the backbone of success. Before UMSL, she attended St. Joseph’s Academy, a Catholic high school.

In its infancy, the RBC focused its attention on St. Louis Public Schools. At that time, “the school system was in disarray, the board was arguing, and most members didn’t have the skill set to be on the school board,” Osborn said. Finances were a mess, and employees were collecting checks but not showing up for their jobs, she said.

With the support of the teachers union, the Black Leadership Roundtable and Civic Progress, “We said enough is enough.”

A committee was assigned to go into the district’s lowest-performing school, Dunbar Elementary, to find what was going on.

“We came out able to say, ‘It’s true, the books don’t come until April,’” Osborn said. In addition, they found computers were not being purchased because the electrical system would not support them. Janitors were not coming to work. Water damage had destroyed a music room and library with no plan to replace them.

“We got to know the level of the problem, which ultimately landed with the state coming in and taking over the school district,” Osborn said. The RBC eventually funded bond issues to help bring much needed improvements into the schools. The organization brought Teach For America to St. Louis as well as KIPP charter schools.

“We decided if we’re going to fund charter schools, let’s fund the best,” Osborn said. The RBC favored KIPP after a visit to one of the nonprofit’s schools in Indiana. Today, KIPP runs five schools in St. Louis, enrolling 2,100 students.

“Charter and neighborhood public schools as a mix are ideal,” she said.

Osborn is the third woman to be named Citizen of the Year since the award’s inception in 1955. The first was Blanche Touhill, in 1997, when she was chancellor of UMSL. With Touhill’s selection, the name of the award was changed from Man of the Year. Osborn worked for Touhill at the time.

Touhill said that when she heard Osborn was leaving the university for the upstart RBC, “I thought: ‘This will be a loss for us.’ But when I realized what (the RBC) was going to be, I urged her to do it. People have to expand and get to the next level of achievement. She has done remarkable things for St. Louis.”

Looking to 2019, Osborn said the RBC will continue its work to reduce violent crime, focusing on the “rectangle” area in north St. Louis that Police Chief John Hayden put resources into this year. The result: Homicides are down.

“When Chief Hayden came on board (in December 2017), and said he was going to identify an area in north city to concentrate on, we made a decision we’d invest in that area,” Osborn said. That means increasing its funding for Better Family Life and the Urban League of Metropolitan St. Louis, two nonprofit groups that have spent decades dedicated to improving housing, creating job opportunities and building safer neighborhoods.

The RBC puts its money and influence behind public initiatives that members believe will improve the region. Last year it backed Prop P in both St. Louis County and St. Louis, generating more money for public safety, including the hiring of police officers.

“When we see things that are for the greater good, who more than us should be involved?” Osborn said. While the RBC will support bond issues and propositions, it does not endorse candidates, and the agency receives no public dollars. And the RBC backs only issues that Osborn and the board think will prevail.

“There is no point in funding something we know is going to lose,” she said. The RBC serves 16 counties and sees working together as the ultimate way forward, including consolidation of some services. But merging does not mean key challenges go away, she said.

“When Francis Slay was mayor, he kept saying that if we had the city and county together, the crime rate wouldn’t look so high,” Osborn said. “There is some truth to that. But as our violent crime rate went up in the city, that became less and less of a good argument.”

Among the many boards that Osborn serves on is Better Together, a nonprofit looking at the fragmentation of the region. She also helped start the Reinvest North County Fund after Brown’s death in Ferguson. In a partnership of the RBC, North County Inc. and the St. Louis Community Foundation, about $950,000 was distributed to 55 businesses and four school districts over two years.

Retirement for Osborn is not on the horizon, she said. That’s good news for St. Louis, Taylor said.

“Her agenda is to make St. Louis better,” he said. “That is special and why she is getting this award.”